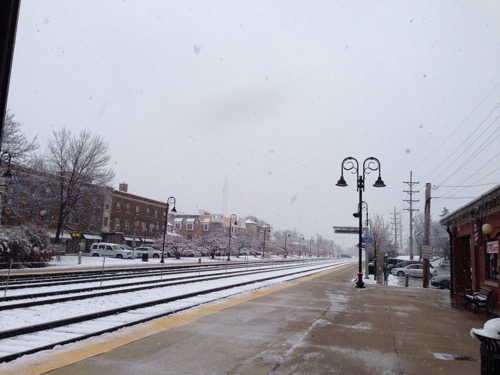 Is the track that is supposed to lead you to your purpose in life always a straight one? Is it the correct one? Can you get off and change directions if you feel you almost reach your purpose? Can you change at a junction to go towards another purpose? What have you picked up along your journey and what have you dropped off?

It seems as though many of us have lost sight of what purpose we have in life.  And when we do lose sight of it we then try to find something that will make an impact.  Why do we feel we have to make such an impact in life? Is it the social media that drives us to become ‘famous’? What about becoming successful? What is success?

I’ll admit here that I am looking for that purpose everyday.  And it’s staring in front of me everyday.  But I sometimes lose sight of it because of the many distractions along the way.  Distractions like people’s perceptions, my job, my title, finances, my looks, being comparatively successful among my peers, etc.  My purpose in life isn’t to be rich or famous or even be like some of the people I admire that are famous for being philanthropists or great business minds.

My purpose is to love those that are around me and be the best husband, father, brother, son, uncle – that is, family man I can be.  I am blessed to have a wonderful family and one that I can come home to.  I know there are many of us in the world today that don’t have that family and are looking for that same purpose.  But the purpose is simple – it’s to love one another.  We are all in it together.

As the Dalai Lama said – The purpose of our lives is to be happy.

Are you happy? Tell somebody you love them and give them a big hug!

At what age did you learn to count to ten? Well I don’t know when it was for me, but for my daughter she will know.  These days we record everything and anything with out smart phones.  Good thing is you sure won’t miss anything.  The bad thing is there’s so much content you don’t know what to do with it!

So when did Audrey learn to count to ten in Cantonese? Well you have the evidence here, she was 2!

Short post.  What’s the deal with signing off your email with just your first initial or your initials?  I find it condescending when it’s coming from someone who is hierarchically higher then you in your company org chart.  And then you see him/her sign off their full name when they email someone above them.

As a father of two years, I reflect a lot on what my parents were thinking at the time I was two years old.  Especially, I think about what my father thought of.  Did he think the same things as me as I do now?

Unfortunately, I will never know as my father was taken by the good Lord almost 15 years ago in Jan 2001.  But what lives on in me his the 21 years that he was around which I believe now are the critical years for any parent and child.

Despite all the family strife and annoyances we deal with today with our parents, you tend to forget the sacrifices and attention your parents gave you while growing up.  When they’ve left your life here, all you remember are those good times and maybe a few of those unforgettable bad times.  But those are the moment that will shape your life forever.

A few moments always come to my mind about my dad.  For one, I remember he was always around in the evenings to make sure I brushed my teeth and said good night to me.  You see, my dad was a restaurant manager so had to work in the evenings so both my sister and I would wait for him to come back home before sleeping.  It would usually be around 9-930pm.  Sometimes we would even stay up a bit to watch the 10pm news and catch the sports news at the end before going to bed.  Sometimes he would even let me watch a bit of Johnny Carson talk show before going to bed.

In the mornings he didn’t have to get to work until 1030ish-11amish for the lunch service.  So he would have time in the morning to make our breakfast (eggs and ketchup and sometimes oatmeal which I didn’t like too mush) and also prepare our sack lunch.  He would even take us to school if we were running late.  But he didn’t like that as he preferred us to take the bus.  Probably because he knew we were paying for it via taxes.  I get it now!

In the afternoons he would be off so if I needed to get picked up in the afternoon at 330pm when school was out he would get me.  But most days when I got older I would take the bus or stay at school for sports or music.

He would always prepare some afternoon snack for me before he head back to the restaurant.  He would also prepare some dinner so that when my mom came home she didn’t have to do much other than make rice (until I got old enough to make rice and start to prepare dinner!).

On weekends, he wouldn’t have to go to work until the early afternoon and I believe in Sunday’s he didn’t work.  I remember that on Saturdays we used to go to 9am church service and then have a lung afterwards.  We stopped going to church for sometime so during that period we would do stuff together in the mornings whether it was working in the yard in the summertime or shovelling the snow in the winter.  My dad would also be around to throw the baseball around or take me to my games early mornings before he had to go to work.

Sunday’s were typically a day of family time.  We may go into the city to have dim sum or just stuck around the house and do house chores.  Sounds a bit like what I do now.

As I got into high school I look back and start to remember that those years I started to do less stuff with the family.  Though when there were family events like dinners or Christmas and thanksgiving we were always together.  But those years it was all about fitting in, girls, finding your identity, etc.  Parents were not cool but were there to supposedly give you guidance during your teen years.  I have to say that those years were probably the toughest for my parents.  Or maybe it was university years.

My dad was around when I arm tarted bringing girls home.  So at least in that front he probably knew I would be okay in the girl department.  He also was around to give me lessons in driving.  He gave me lots of practical lessons in life, indirectly.  Like most Asian dads, he wouldn’t necessarily have a one on one with you about stuff.  The only time I can remember he did was when he found my Playboy magazine and then had a serious one on one about permissions sex and told me about my uncle who had contracted HIV. That was shocking and also a very touching moment between me and my dad.  Something I never would have expected.

My dad was a sensible man.  Never got angry but always was rationale when he knew I was doing something wrong or something he disapproved of.  He would just use that opportunity to teach me a lesson and show disappointment.

I really think that the disappointment factor works the best as that had the biggest impact on me.  And now as a parent I can see see that he might be thinking of was thinking where did I go wrong.  Or did I teach him that? But I suppose at some point you lose a bit of influence in your kids and you just pray and hope that the foundation you have built supports those pillars in your kid’s life that will make him grow.

Now that my dad is physically not here to see the work that he has done with me, he can watch from the heavens.  His legacy lives on within me as a father of two years.  I know he is watching and I am so thankful for his guidance.  I love you dad.

The subject says it all.  I don’t usually have man crush.  And note I am not gay (and I am not opposed to those that decide that is for them).  But Tim Ferris has done a fantastic job of guiding and teaching people like myself to live the life they want to.  Thank you Tim.
If you haven’t read any of Tim Ferriss’ books or listen to his awesome podacsts you should start now.

My own experience with Tin Ferriss’ knowledge and way of teaching has changed my life.  And I talk about it as much as I can with people I come acrosss that are looking for that next drive in life!
Tin Ferriss I can’t thank you enough.
Cheers mate!
Jeff