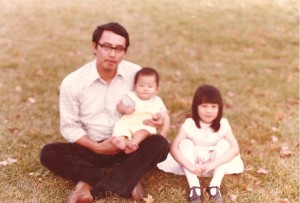 So what’s this all about?  It’s simply a site dedicated to my father, Bob, who believed that if you have a dream go for it.  So my dream is/was to open a cafe.  Had an idea of opening a bubble tea shop in London, but after doing a bit of research, realized it wasn’t going to be as easy as I thought.   So I decided to open up an online cafe and serve you my thoughts.  Whether you like it or not, that is to be determined.  But one day it will happen.

So Bob…who was he?  Well to start he was my father who was with us until I was 21.  In the picture you see my sister to the right of me and my dad holding me. He was around my current (2015) age, 36, at the time.  My mom took the picture, I think.  He is now with the Lord and we are blessed to have had him as long as we did.   We will be with him in time.  He was first a foremost a family man.  Family came first.  He worked in restaurants and at one time owned one.  He was a handy man, always able to fix things in and around the house.  He was a brilliant cook, very creative in the kitchen and could always turn a leftover dish from a restaurant into a masterpiece.  He taught me many things, but if I were to say what is the most important skill he taught me was    love.

Typical of most Asian fathers, love is shown in peculiar ways.  The way he showed is love was by focussing on the family.  Thought he worked long hours and days in the restaurant, he always made time to be the father who would prepare your breakfast in the morning, pack your sack lunch for school, take you to school if you were running late, pick you up from school, play sports with you, watch you play sports, make sure you practice the violin, and encourage you to be the best you can be.

If you meet me in person, you’ll see the man that Bob was.   His legacy continues on in me.

“For God so loved the world that he gave his one and only son, that whoever believes in him shall not perish but have eternal life”